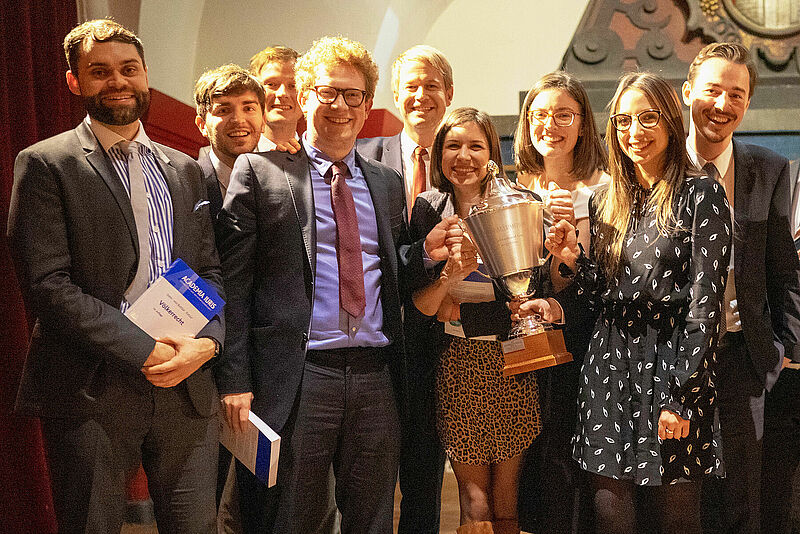 Hertie School students are the national champions of the German Jessup International Moot Court competition, which took place on 21-24 February in Hamburg, besting last year’s second place title. Competing against law schools, the Hertie School public policy and international affairs students are rapidly gaining a reputation in Germany’s international legal community for their prowess in legal argumentation, and will head to Washington, DC, in the first week of April for the international finals.

The students won all four preliminary rounds, followed by the quarter and semi-finals before winning the final against the host, University of Hamburg, Saturday afternoon. Second-year Master of Public Policy student Felix Martens also won “Best Oralist of the National Final”, while Felix and second-year MPP student Tim Stadtaus shared the “Best Oralist Award Runner-Up” among all oralists of the tournament. The other participants from the Hertie School were Hannah Miles and Timon Lepold (both 2nd-year MIA students), and Harry McNeill Adams (2nd-year MPP student).

Jessup is the world's largest moot court competition, with participants from over 550 institutions in around 87 countries. It simulates a fictional dispute between countries before the United Nations’ International Court of Justice, in which teams prepare and argue oral and written pleadings. Judges include renowned law professors from all over Europe, judges from the Bundesverfassungsgericht and several international tribunals.

“We have to commend our team – not only did they demonstrate incredible talent but were an amazing group of students. We are very proud of all five of them,” said Pierre Thielbörger, Professor for International Law and one of the coaches for the Hertie School team, who noted that the team has been getting better each year. Other coaches were Professor for European Law and Governance Mark Dawson, Postdoctoral Researcher Ana Bobić and former competitor and 2018 MPP graduate Rebecca Segall, who is a Research Associate at the Hertie School.

The topics for the competition were corporate abuses of human rights, international environmental law and rights of indigenous peoples. None of the team members have studied law before. Their backgrounds are in economics, history, political science and linguistics.

Link to the original article here.